Enter your email address to receive the latest news of Boxted and the local area.

Some of Boxted’s Past and Present 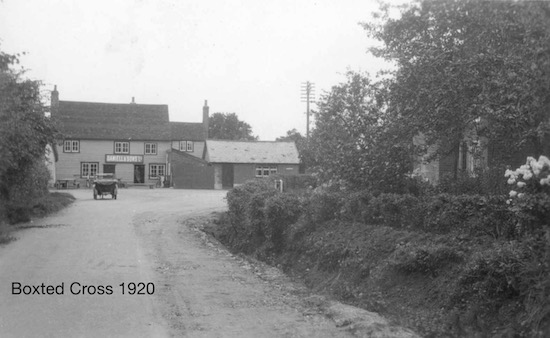 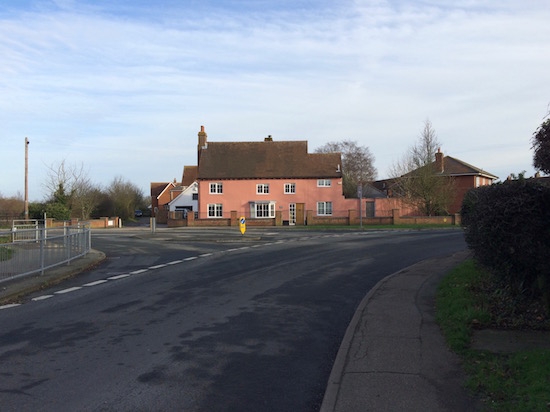 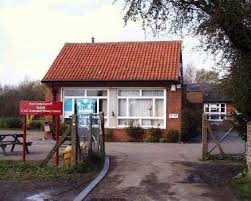 The first St Peter’s Boxted Primary School showing a new classroom built in 1954 on the front of the original Victorian Building. 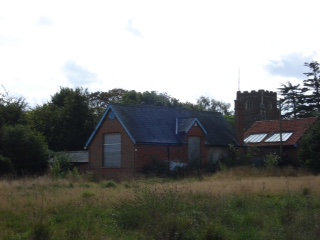 This photo shows the original school building, built in 1837, prior to it’s re-development as a house. 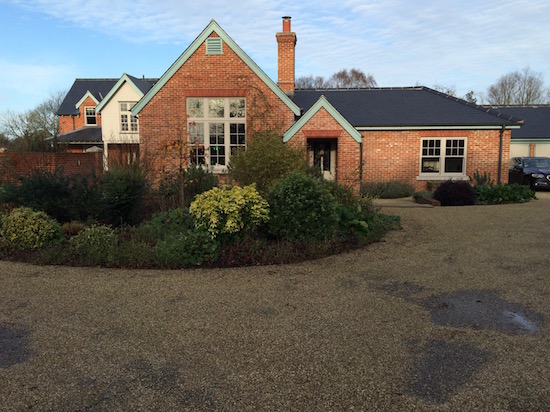 The new house built on the site following the primary school’s move to a new purpose built building at The Cross. The tallest gable is the original school building. 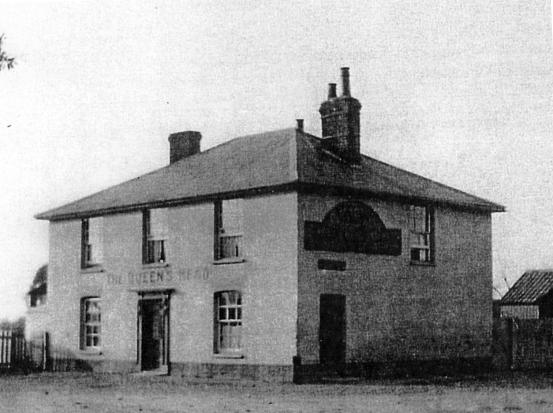 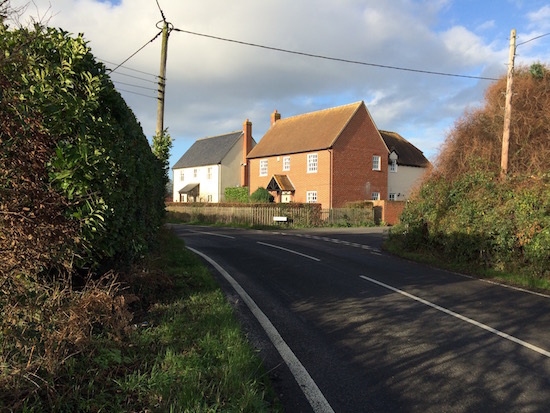 When the Queen’s Head pub first closed it was used as a private home. The property was later purchased and turned into a privately run care home for the elderly and extended extensively. The next purchaser let the building for multi occupation. Eventually a builder obtained planning permission to erect two new properties on the site. 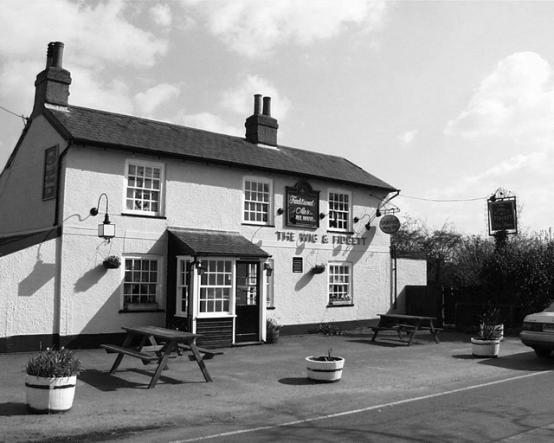 In the late 1970’s the Wig was one of the first pubs to embrace the trend for serving meals. It was very popular, especially in the summer when the garden outside could be utilised with people coming from all around to eat there. The landlords, Val and Dave Thompson, sold up and moved to America where Dave had a job waiting for him working with heavy horses. The pub never really took off again from then on. 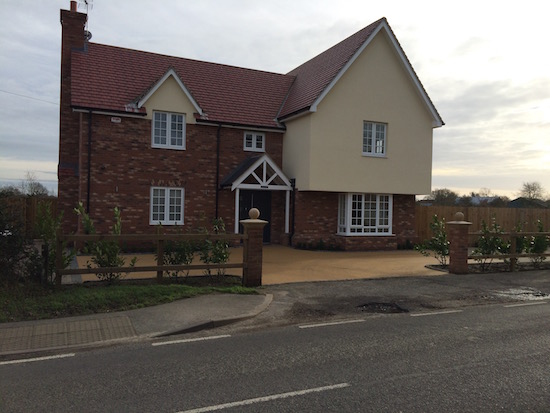 The house that has replaced the Wig and Fidgett pub. 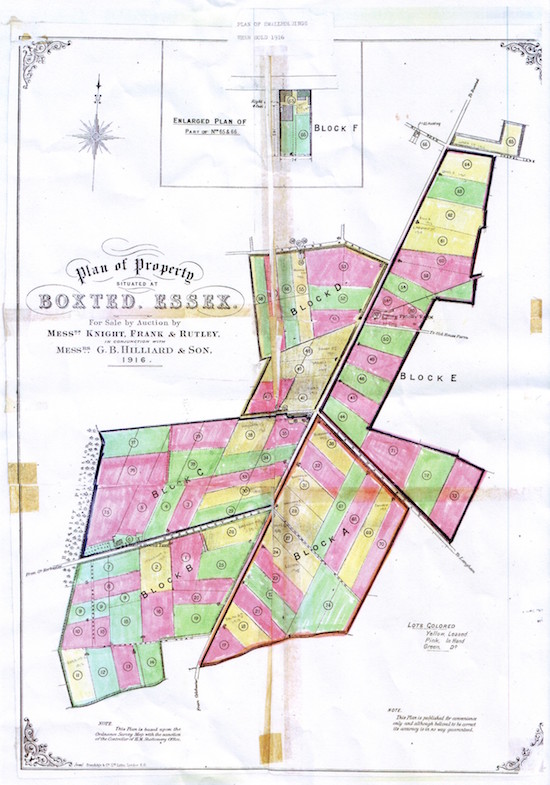 2015 marked the bi-centenary of the enclosure of Boxted Heath.

A map of The Salvation Army smallholding scheme on the original Boxted Heath. Chapel Road, Queen’s Head Road, Langham Road and Horkesley Road are marked on the map all branching off from Straight Road. Colchester Park and Ride is now situated on the other side of Salary Brook which marks the southern boundary of The Heath.

Boxted resident Douglas Carter’s account of how Boxted Heath evolved since 1066 is featured at the end of this newsletter. 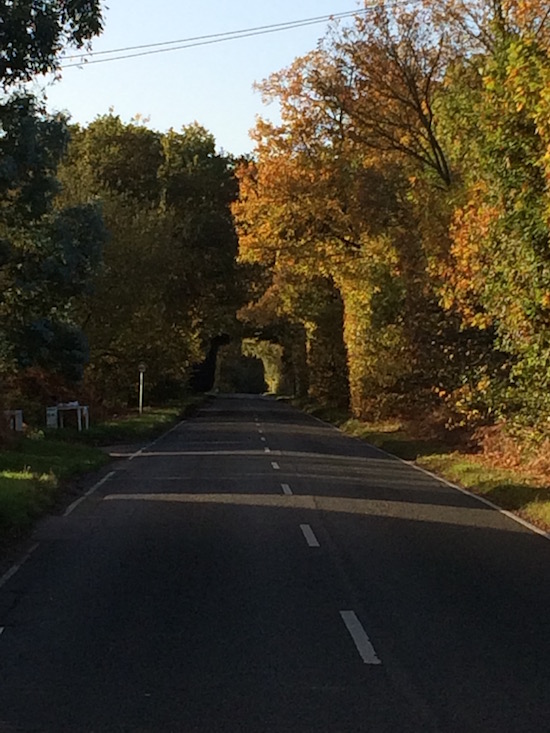 Boxted Straight Road approaching the southern boundary of the Heath near Betty Potter’s Dip and Salary Brook with the attractive naturalised oak trees and hedgerows so typical of the area. 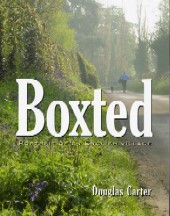 Lot’s more of the village history is documented in the above book which can be purchased from:
Stephen Whybrow

Similarly if you have any old photos or documents relating to the village which you are willing to share please contact the Boxted History Recorder, Annette Whybrow, (same details as above) 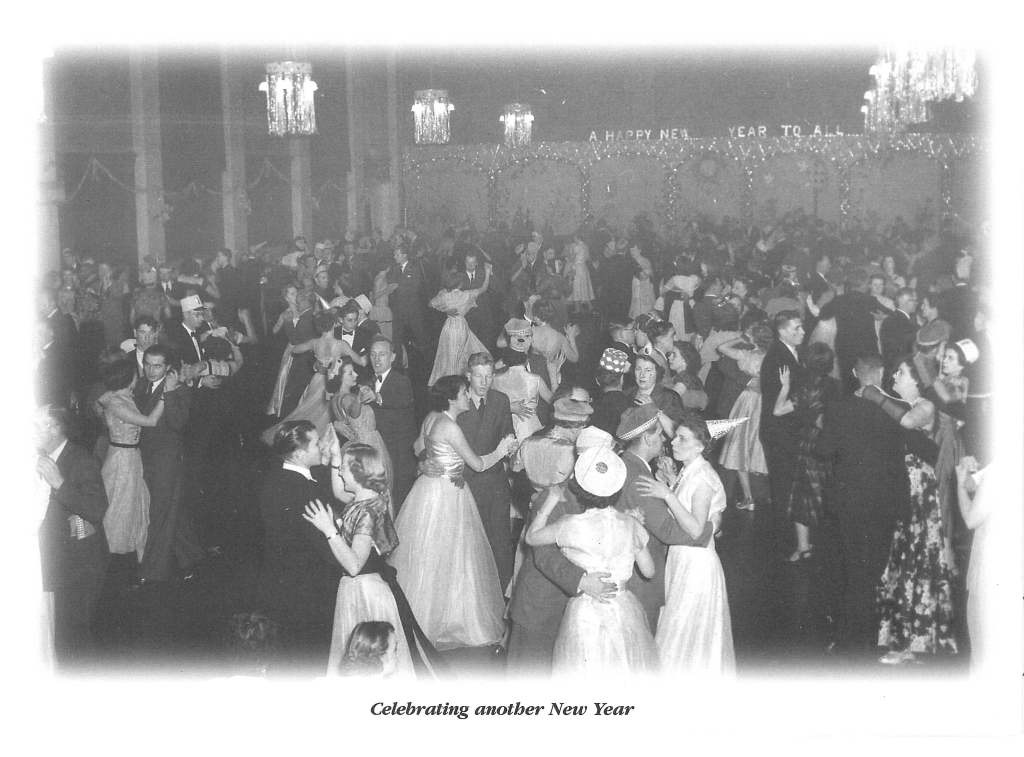 The hospital was a source of local employment. 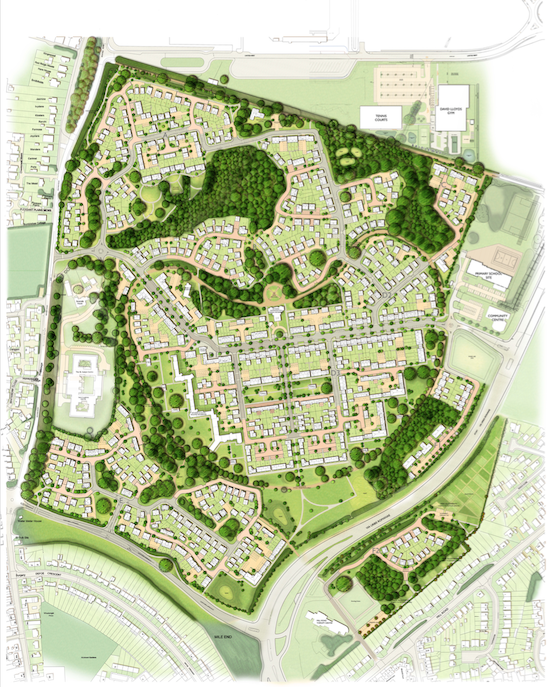 730 dwellings are to be built on the site of Severalls Hospital. 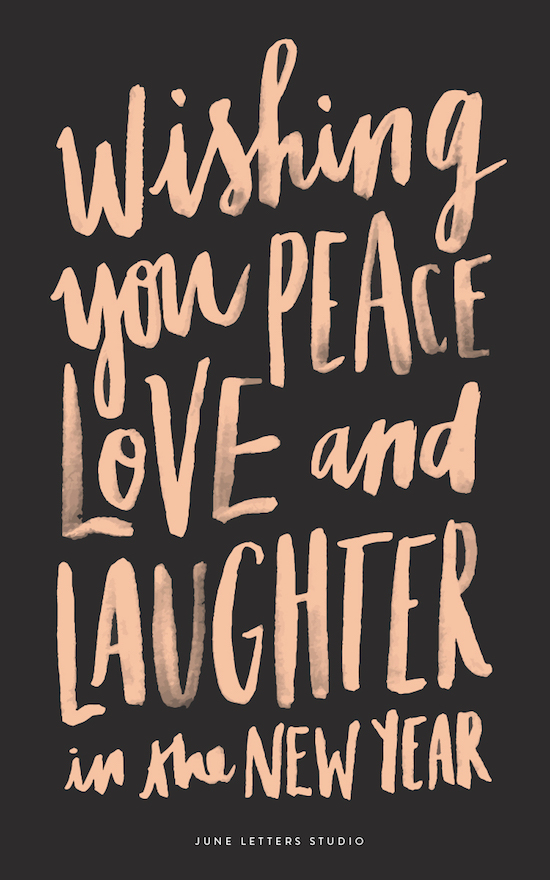 How Boxted Heath came to exist:

our country’s history played out in very local

2015 marks the bi-centenary of the enclosure of Boxted Heath. Boxted Heath is an area of some 500 acres of land to the south of Boxted village and just north of Colchester.

Following the Norman Conquest of England all land was in the gift of the King to whom the Lords owed allegiance. In time of war they had to supply the king with men and arms and at all times to contribute to the good of the country. When the lords or their followers or successors were no longer able or willing to do this then the land returned to the King. So all the land in the kingdom belonged to the King. At the time of the Domesday Survey in 1086, Boxted Heath is described: an area of swamp and bog just south of Boxted Village. Later, in the Middle Ages, a more graphic description says: “A wild and desolate area of bog and swamp, home to many wild and dangerous animals, also bands of ruffians and brigands”.

Most of the farmland in the village was enclosed in the 12th – 14th Centuries and Queen Elizabeth 1st sold the freeholds to the manors just prior to the “Armada” to raise money to fight the Spaniards. It is likely that the Heath was not enclosed at this time because of its bad condition. Good agricultural land in the 16th Century was worth no more than 2d an acre (today about £7)

At the end of the 18th century the UK was involved in a war with Napoleon’s France which continued some years into the 19th Century ending with the Battle of Waterloo in 1815. During this period food became very short, due to the effects of the war, and the expansion of the population of our towns and cities brought about by the Industrial Revolution. The price of food became very expensive, a quarter loaf of bread cost one shilling – wages were about six shillings per week. The price of wheat to the farmer was such that this figure was not equalled until 1940 –One hundred and twenty years later!

So the government of the day tried to increase food production from our own resources (land), and one of the methods used was to bring more land into cultivation – hence the enclosure of common land i.e. heath, moor etc.

The government set up a commission to oversee this work, and they decided to enclose and bring this land into cultivation, and then to sell the land to the farmers at auction sales in the various districts. Local mapmakers and surveyors were employed to survey this land and produce a plan to reclaim it for agriculture. So a plan was produced to enclose Boxted Heath.

The surveyors started work in the spring of 1813, when it was possible for them to see the amount of water surplus to requirements and it’s fall.

Boxted Heath was very, very flat with little natural fall to get the water away, so it was going to be necessary to make provision for drainage. Excess water seemed to have collected on the eastern and southern sides and some more to the northwest.

It proved possible by digging a channel to let the water on the eastern side into the Stour, and more water was drained into the various brooks surrounding the Heath. By the summer it was possible to dig a drainage channel 8 feet wide by 6 feet deep around the heath and further drainage ditches across the heath from east to west. By the summer of 1814 it was possible to start enclosing the land and bringing it into cultivation.

The heath was subdivided into a geometric pattern of fields, which were sold at auction. Each field, whatever it’s acreage, was not only marked by a bank and hawthorn hedge, also had an open ditch surrounding it for drainage. Toward the edge of the heath where cottages had been built and the heath joined farmland, the enclosures were smaller, some no more than half an acre. These small areas were for the people who had grazed animals on the heath – it was thought that at auction they might not have been able to purchase larger fields. The majority of the enclosures contained 10 acres of land. We are not able to discern these enclosures today as most of the area of the heath was used for the Salvation Army Smallholding Scheme.

To gain access to the fields, roads were laid out dividing the main areas into blocks. At the centre we had Boxted Straight Road or Long Road – which extended from Heath (now Holly) Cottage to Betty Potter’s Dip – some 2.5 miles. It is said it was marked out with a pair of horses and plough, the ploughman must have had a good eye, the road is completely straight. Other roads leading off

Straight Road laid out at this time were Chapel Road, Mill Road, Queens Head Road, Langham Road, Ivy Lodge Road and Ellis Road. These roads were surfaced with stone from pits near Betty Potters Dip and Runkyns Corner. To improve drainage further it is said a large part of the heath after enclosure was mole drained. To do this the mole had to penetrate to the clay subsoil so that the drain would stand. This could be as deep as 2 feet. 18 horses pulled this item of equipment, the mole being 3 ft. apart.

After enclosure, at the auction of the heathland John Freeman of Rivers Hall and William Beaumaurice Rush of Boxted Hall bought most of the land. Other large purchases of the land was William Fisher and John Joscelyn.

According to records some 523 acres of land was enclosed, but at auction only 410 acres were sold, and later when the Salvation Army bought land on the heath for the smallholdings, the area of the heath was given as 450 acres. No explanation for these discrepancies is given