The Great Migration to America

Between 1620 and 1640 many people left England for The New World of America. Although economic considerations may have played a part in their decision, it seems that religious belief was the major reason for the exodus. The sailing of the Mayflower from Plymouth on September 6 th 1620 carrying the Pilgrim Fathers to Massachusetts Baymarked the beginning of this exodus.

Towards the end of the reign of James I, when the Duke of Buckingham governed the country, any religious order outside the Church of England was discriminated against. When James died in 1625, and his son Charles came to the throne, matters did not improve. Charles’ wife, the French princess Henrietta Maria was a devout Roman Catholic and held great influence over her husband. As a result the Puritan minority within the Church of England felt threatened, particularly in East Anglia where much of the wealth derived from the cloth trade belonged to these Puritans. Many parishes, Boxted among them, had a Protestant divine as incumbent and the elders of the church, the Maidstones, were avid Puritans. It was inevitable that some of Boxted’s inhabitants would take part in the Great Migration.

A few miles across the Suffolk border in the village of Groton lived John Winthrop who had inherited Groton Manor from his father, Adam. John, with a group of like-minded men, looked overseas to America where they had visions of a new colony based on Puritan values. Together they formed the Massachusetts Bay Company with John Winthrop as governor. Plans were laid for a ‘massive’ migration to the colony, and the voyages that followed became known as The Great Migration. Eleven ships were prepared for this undertaking, and on April 6 th 1630, five ships set sail from Yarmouth in the Isle of Wight with nearly 400 settlers on board. After a 10 week crossing they made landfall on a wild and desolate coast. The other six ships of the fleet sailed in May and arrived on various dates in July. Altogether the fleet brought about 700 settlers to Massachusetts Bay although it is thought that 200 people died on the crossing.

Sailing on the “Arabella”, the flagship of the fleet, were the Rev. George Phillips, vicar of Boxted, with his wife, Elizabeth and their three children, Samuel, Abigail and Elizabeth.

Maps showing the original allotments of land at Watertown indicate that about one in five were occupied by families from the Boxted area so their influence on the colony would have been quite considerable. In fact many of their ideas were subsequently incorporated into and remain part of the Constitution of the U.S.A..

A detailed record of the events leading up to the migration, the voyages and life in the New World can be found in local historian Douglas Carter’s book Boxted Migration available from CLW Publishing, The Old Vicarage, Boxted, Colchester, CO4 5ST.

Reverend George Phillips, the first minister of Watertown, Massachusetts, was the son of Christopher Phillips of Rainham, Norfolk. He was born in 1593 probably at Rainham, St. Martins, near Rougham, in the hundred or district of Gallow, county of Norfolk, England. George matriculated at Gonville and Caius College, Cambridge in April 1610 and graduated as B.A. in 1613 and received the degree of M.A. in 1617. “He gave early indications of deep piety, uncommon talents, and love of learning, and at the University distinguished himself by his remarkable progress in learning, especially in theological studies for which he manifested an early partiality” (source of quote not provided). He took orders in the Church of England and served for some years as vicar at Boxtead, Essex though the length of his service is uncertain owing to the loss of the parish registers.

George Phillips was settled for a time in the ministry in the county of Suffolk, but suffering from the storm of persecution which then threatened the non-conformists of England, he determined to leave the mother country and take his lot with the Puritans. John Maidstone, a nephew of John Winthrop’s second wife, was among George’s parishioners (and later an officer in Cromwell’s household) and wrote to Winthrop on 4 Nov 1629 stating that Phillips was resolved to go to Massachusetts and highly recommending him. He embarked for America 12 Apr 1630 in the Arabella, with his wife and two children, as fellow passengers with Governor Winthrop and Sir Richard Saltonstall, and he arrived at Salem June 12th. Before the final embarkation which had been considerably delayed, Gov. Winthrop says in a letter to his son John Winthrop, “From aboard the Arabella, riding before Yarmouth, April 5, 1630. Yesterday we kept a fast aboard our ship and in the Talbot. Mr. Phillips exercised with us the whole day, and gave very good content to all the company, as he doth in all his exercises, so as we have much cause to bless God for him”. George was one of the seven signees of The Humble Request, which is dated April 7, on the eve of sailing, and which was printed that same year. There seems to be some ground for believing that George Phillips drafted this noble statement.

George’s wife died soon after arrival in Salem and was buried by the side of Lady Arabella Johnson, both, evidently, being unable to endure the hardship and exposure of an exhausting ocean passage. He soon moved to Watertown, and without delay settled above the church in that place which was called together in July. At the Court of Assistants, 23 Aug 1630, it was “ordered that Mr. Phillips shall have allowed to him 3 hogsheads of meale, 1 hogshead of malte, 4 bushells of Indian corn, 1 bushel of oatmeale, halfe an hundred of salte fish”. Another statement from the same source says, “Mr. Phillips hath 30 ac of land graunted him opposite the Charles Ryver on the South side”. His first residence was burnt before the close of the year. His later house was “opposite the ancient burial ground, back from the road”.

George continued to be the pastor of the Watertown church, greatly respected and beloved, until his death 14 years after his arrival. He died at the age of about fifty-one years, 1 st Jul 1644 and was buried the following day. “He was the earliest advocate of the Congregational order and discipline. His views were for a long time regarded as novel, suspicious, and extreme, and he, with his ruling elder, Mr. Richard Brown, stood almost unaided and alone, until the arrival of Mr. John Cotton, in maintaining what was and still is, the Congregationalism of New England. It is not now easy to estimate the extent and importance of the influence of Mr. Phillips in giving form and character to the civil and ecclesiastical institutions of New England” (source of quote not provided). In 1632 George was one of the leaders in the protest made by Watertown against the action of the governor and assistants in arbitrarily levying a tax on the town. The tax was not remitted, but within three months an election of representatives to the General Court was agreed upon, with the understanding that in future no taxes should be levied without the consent of the court. To this Watertown protest, is rightly traced the beginning of representative government in Massachusetts.

Accompanying the Phillips was the Stearn family whose daughter, Hannah, was the domestic servant to the Phillips family. In the Arabella’s manifest it shows that the Stearn family came from Stoke-by-Nayland but records the Phillips as coming from Rainham, Norfolk. It was the places of birth that were recorded and not their place of domicile. A number of the emigrants settled in Watertown where George Phillips established a church. Other Boxted families to migrate at this time are thought to be the Pickerings, who settled in Cambridge, Massachusetts and the Bakers who established themselves in Charlestown.

More people left Boxted in 1637 among whom were the Warners, Stones, Lumpkins and Bakers. It was thought they sailed on the “Increase” but later research has disproved this and the name of their ship is unknown.

William Warner, a weaver, settled in Ipswich, Mass. in 1637 with his two sons, John and Daniel, and his daughter, Abigail. Where they lived in Boxted is in some doubt. The name given to their house was “Merrylees Cottage” which is not traceable. It would appear that William’s daughter, Abigail, was married. She had married Thomas Wells of Great Horkesley in 1634. Thomas left Boxted in 1635 on the “Susan and Ellen”. It appears as though Abigail remained behind to nurse her mother who may have been sick for she did not accompany the family to America. It is likely that she died prior to the rest of the family leaving for the New World. After his arrival in Massachusetts, Thomas Wells was granted five acres of meadowland in the name of his father-in-law, William Warner, at Ipswich, Mass..

Another 1637 migrant from Boxted was Richard Lumpkin, a farmer, who lived at Parsonage Farm, Church Street. He was married to Sarah Baker at St. Peter’s church by George Phillips on October 20 th 1614. Sarah and Richard settled in Ipswich, Mass. at the same time as William Warner. Relatives of Sarah (Baker) Lumpkin settled in Charlestown. Sarah was probably the younger sister of William Warner’s wife which would account for the closeness between the Warners and Lumpkins. Accompanying the Lumpkins was William Bartholomew, a farm labourer, married to Ann Stone. Ann’s brothers, Simon and Gregory Stone, had emigrated to Boston and Watertown from Great Bromley, Essex in 1635. The Stones were a Boxted family, all being born within the parish.

Little is known of William’s life in Ipswich. He was known as a planter and was made a freeman of Ipswich on May 2 nd 1638. There is also a record showing that he and William Bartholomew were appointed to lay out land granted to Richard Lumpkin and William Whittered. His family were spoken of as ‘people of consideration’. William Warner died in 1648.

It is probable that Richard Lumpkin took the house lot next to the Warners and that he farmed the 97 acres of Warner’s land. He died in 1642 and his widow, Sarah, married Simon Stone of Watertown in 1654. On November 10 th 1654 Sarah Stone, née Baker ex Lumpkin, deeded to Daniel Warner, son of William Warner, her house lot and 158 acres of land in Ipswich. This underlines the relationship between Sarah and the Warners. Sarah went to live with Simon Stone in Watertown but they both returned to live in Ipswich. Thomas Wells, husband of Abigail Warner, became a freeman of Ipswich in 1637 where he died on October 26 th 1666. Thomas deeded 340 acres of land and two house lots to his descendants.

It also appears that most of the other migrants from Boxted who had accompanied Rev. Phillips to Watertown found their way to Ipswich together with those from Charlestownand Cambridge. There are records to show that the Stearn family, who left on the Arabella in 1630, owned several house lots in Ipswich by 1650. These Boxtedians seem to have been very productive in their new land. Simon Stone had three wives and between them they produced 18 children. By the second generation the Warners had gained another 22 additions. As a result it has been calculated that 20% of the population of Ipswich, Mass. are descended from Boxted emigrants.

A 1925 home movie showing a farm during the transition period from horse to tractor power, with special attention to the labourers who work on the farm in Boxted.

Link to White's Directory of Essex 1848 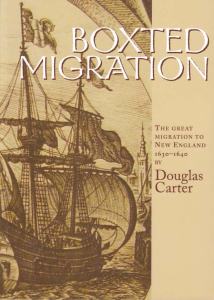 Boxted, Portrait of an English Village 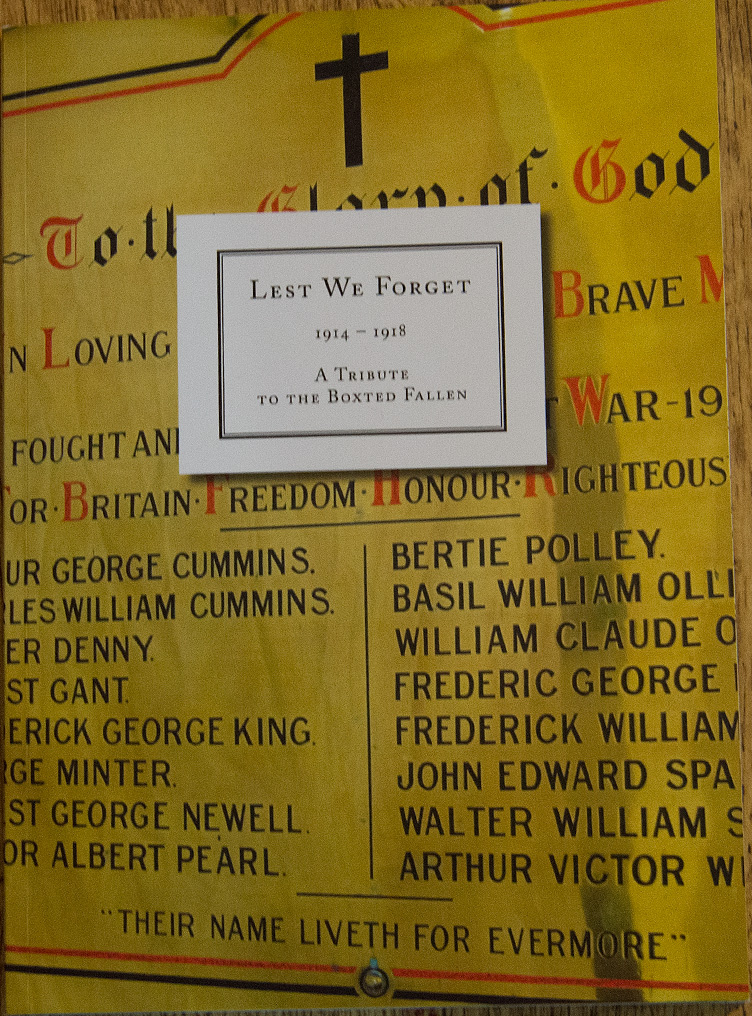